Dancing In The Rain

This morning, I unmolded and cut the Dancing in the Rain soap. I probably should have waited until later in the day (the soap was on the soft side) but I was eager to see how it had turned out. It wasn't how I was hoping it would be but it's definitely acceptable. 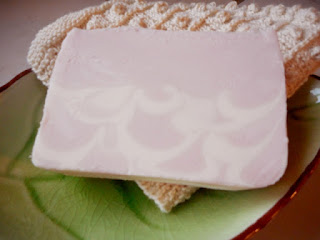 I'm thinking now that it might have been better in a slab mold and cut horizontally rather than in a loaf mold and cut vertically. I'll try that another time. As an aside, I've made a list of techniques I'd like to try. The dancing funnel pour is back on that list.

I also trimmed the rimmed soap; I used some of the soap dough to make the rim, got that fitted into two cavities of a silicone mold and filled them with leftover soap from the Rain soap. I'm pleased with the result. I have a feeling some of the colour (especially the red) may bleed. It's pretty intense. We shall see. 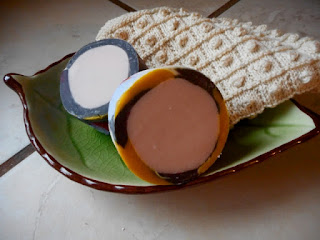 This afternoon, I planned out and made another batch of soap. It didn't go exactly as planned, to say the least.

I bought a texture mat at the Bulk Barn today and cut it up to use in my soap mold. The intention was to colour a bit of the soap batter and coat the mat before pouring in the rest of the soap batter. My batter went from fluid to thick trace in, literally, seconds! It went so fast I almost didn't have time to get the scent into it.

It's definitely not the prettiest soap I've ever made but it does smell good. It's scented with lavender, patchouli, and jasmine. 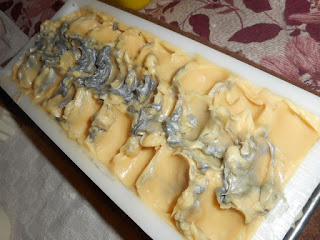 The soap should be a good one; it's made with tallow and lard, along with palm kernel oil, coconut oil, olive oil, and castor oil. Any soap made with lard and tallow is bound to be a nice soap so, even though it isn't pretty, I'm still content. Besides any day with time spent making soap is a good day.