The Bastille soap was made yesterday and I think I can safely say this will be, as my daughter says, a gooder. It's made with Pomace olive oil with the addition of a little coconut oil and augmented with the addition of pureed carrots and buttermilk instead of water. I scented the batch with two teaspoons of lavender. It smells amazing and has a very pale orange colour, thanks to the pureed carrots. 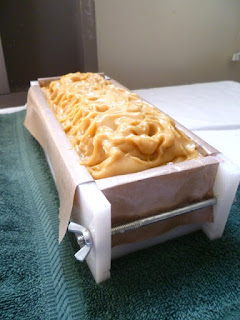 By last night, it was already hard enough to cut and I probably should have. I cut it this morning and it was chipping a little. It was that hard, within 24 hours. I tested a few of the crumbs and it lathers beautifully already. I can only imagine what it will be like in 4-6 weeks. 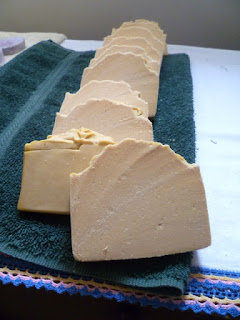 One of these days, I'd like to get a proper soap cutter. My little cheese cutter is just a bit too small for the job. Ah well. I'm still very happy with this recipe.
Posted by Ev at 10:27 AM No comments: 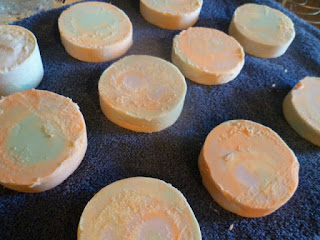 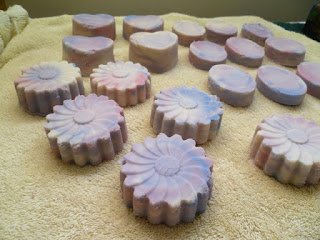 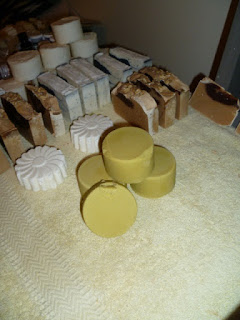 Now, though, it's time for another cup of coffee and a bit of vitamin D, in the form of sunshine.
Posted by Ev at 8:23 AM No comments:

There has not been a lot of production around here lately and I'm feeling a little deprived. Most weekends these days are taken up with gardening and grandchildren, leaving very little time or energy for making soap... or anything else, for that matter.

However, because John has to go for some medical tests and he isn't allowed to drive afterwards, I've taken the day off. We don't have to leave until around lunch time so I have some time to make a batch of soap.

One of the earlier soaps I made has really impressed me over the past couple of months. Last September, I made a batch of brine soap, made with salt water. I've been using it as a facial soap for the last month or so and I have to say... I love it! I don't have a lot of it left so I decided it was a good time to make myself some more.

I don't think I ever took pictures of that soap when I first made it. It was the first, and only, time I used a Pringles can as a mold. I used an in-the-pot swirl with pale pink and pale blue swirls. This time, I'll be using a selection of silicone molds and will again be doing an itp swirl, with pink, blue and mauve. Last time, I scented the soap with lemongrass and ylang ylang; this time, I'll be scenting it with lavender and patchouli. I'll also be adding a couple of cubes of frozen coconut milk that's been hiding in my freezer.

I'll let you know how it turns out on Saturday. Right now, it's time to get soaping!