Well, the entry thread for the floating soap challenge is open and I've posted my soap. That means I can post my entry here. Without further ado... 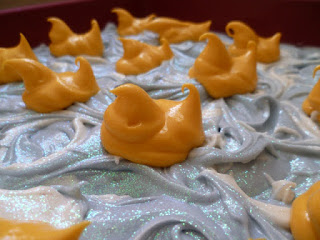 This is just after getting it into the mold. My piping skills definitely need some work but some of the "peeps" turned out okay. It's meant to be representative of water with floating "rubber duckies". I made a 30 oz. batch of soap and it filled a 9" x 9" square pan, or 16 square bars (well, sort of square).

After almost 48 hours, I was able to unmold and cut it. One thing about this soap is that it doesn't cut very nicely. It tends to chip a lot more than regular soap does. 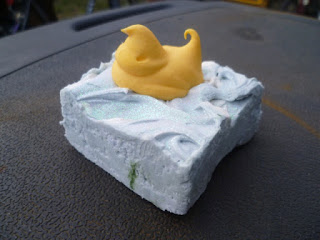 I wanted a little bit of green in the soap as well but it got mixed in a little more than I'd anticipated. Oh well, not a big deal, really. The sprinkling of glitter over the "water" really gives the soap a nice shimmery touch.

But, you ask, does it float? 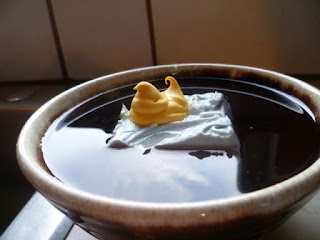 Oh yeah, it does! The only thing I don't like about this soap is the scent. I bought a fragrance oil from Voyageur Soap & Candle in Langley, BC and the one bad thing about buying online is that you can't smell the scent before you buy. I don't like it at all. To me, it smells like some cheap shave cream or after shave.

My grandchildren, however, love it. I'm just hoping the scent fades with time or I'll be giving it all away.
Posted by Ev at 6:34 PM No comments:

Today's the day I make my "real" floating soap, the one that will, hopefully, be my entry into this month's SMF challenge.

The lye is cooling outside. The oils have been melted together and are cooling; the colorants are mixed, the scent (Rain) has been measured and the mold has been prepped.

And I know what I'm doing. Well, in my head I know what I want it to look like when it comes out of the mold. Whether it actually comes into fruition or looks anything like my vision remains to be seen. 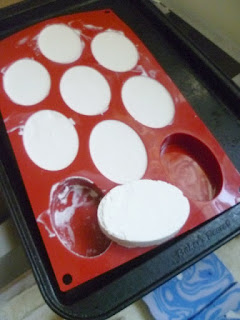 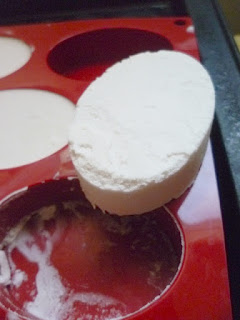 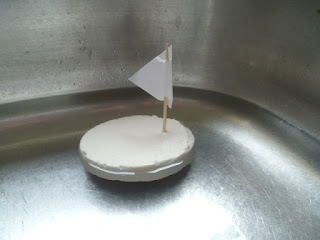