One of the things I love about making soap is the anticipation of making that first cut into a fresh loaf of soap. You never know for sure if the soap turned out the way you'd envisioned it. In the case of the Salt & Pepper soap, it turned out exactly as I'd hoped it would, glycerin rivers and all.

See the crackled appearance in the white part of the bar? That is what's known as glycerin rivers. I'm by no means an expert but here's one explanation from soapmaker extraordinaire, Auntie Clara, explaining glycerin rivers: "...when soap goes through gel phase, particles of colour pigment added to the soap seem to gravitate and stick to the greasy, water-repellent tails of the soap molecules while leaving the water-soluble heads of the molecules without pigment. This happens sometimes when soap coloured with titanium dioxide and other colour pigments goes through gel phase."

Titanium dioxide is what I used in the white part to make it more white. I know that when I make this particular soap, I get glycerin rivers and I love the look in this case.

The Charcoal & Lavender Castile was, shall we say, educational. With the first cut, I realized it had gone through partial gel. The gel phase of soap making is the heating stage of saponification. Once you pour your soap into its mold it will start to heat up. Gel phase starts with the soap turning translucent in the middle and then spreads out to the edges. ... The biggest difference between gelled and un-gelled soap is the color of it. (From Lovinsoap.com)

You can recognize partial gel instantly. There will be a ring spreading from the center but not to the outer edges of the soap. That's what happened with this one; there was a pale grey ring in the bars. I didn't take a picture of it because I was, if I'm honest, a little disappointed. John, however, thought it was pretty cool and was disappointed when I planed each of the bars, which helped to diminish the very obvious ring. 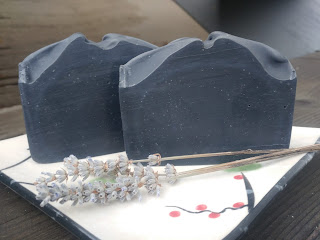 Partial gel in no way affects the quality of the soap; like glycerin rivers, it's purely cosmetic. Both of these soaps will be amazing once they've cured, in about 4-6 weeks. Next time, however, I may force gel in the charcoal soap, for cosmetic reasons only.
Posted by Ev at 9:35 AM No comments:

With work being a bit slow at this time of year, my boss suggested that my co-worker and I each work half days for the remainder of this week. I hate to say it but we both jumped at the chance. Since I do the daily cash out, I suggested he take the mornings and I'd take the afternoons. Today's the first day we're doing this and I've taken advantage of the opportunity to make another batch of soap.

This one is called Salt & Pepper; the white side has poppy seeds in it, to resemble pepper and the black side has coarse kosher salt in it to resemble..... well, salt. I've scented it with Salt Water Mermaid from Candora.

I've made this one a few times before and it's always been popular. I haven't had it in stock since early last year so it's about time I made it again. Inside, it has a side to side hanger swirl and the salt in the dark side will give the soap a somewhat mottled appearance. The recipe also includes lard, which makes a very nice skin loving soap. I've topped it with a little kosher salt and some poppy seeds.


I should be able to cut this loaf some time tonight. Once it's cut, I'll take the "official" picture. Now though, it's time to get ready for work.

One of the soaps that sold out at last year's market was my Charcoal & Lavender Castile soap. It's a basic castile soap, with a little coconut and castor oil for bubble support. Then, I added a good dose of charcoal and some lavender essential oil. It's also made with sea water. Real sea water from Canada's West Coast. My daughter's partner brought it to me from Nanaimo, on Vancouver Island.

Charcoal and lavender have both been used throughout the centuries for skin care, especially for those with oily or break out prone skin. That said, soap is soap. In itself, it doesn't cure anything as it's a wash off product but it certainly won't damage your skin (unless you're allergic to any of the ingredients, obviously).

One of the things I've been working towards with my soap is to have several "lines". One of them is Basic Soap; this soap, along with unscented and uncoloured Castile soap are a part of that line. One other line this one qualifies as is Vegan Friendly. It's made with plant oils, Activated Charcoal (which is made from wood) and essential oil.

I think it's also one of my most dramatic soaps, dark and a beautiful!

As a side note, two posts in one day after almost a one year absence... talk about jumping in with both feet, right? 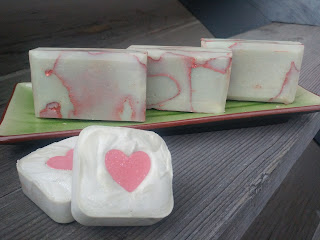