Well, my soapmaking has hit a bump. The lavender, patchouli, and jasmine soap is out of the mold and cut and..... it stinks! It really stinks. Even though there is only 1/2 teaspoon of jasmine in the entire loaf, it dominates dramatically. On the bright side, the soap end I tried lathers beautifully and smells better than the soap itself.

I'm a little torn as to whether or not I should scrap the entire loaf and write it off, or offer it for sale at a reduced rate. Some people might like it and it is, after all, a decent soap. Decisions, decisions. 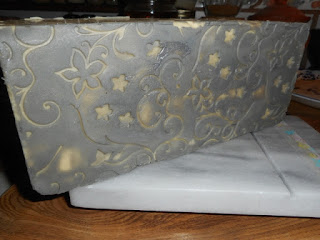 Here's the bottom of the loaf, which I had wanted to be the top originally. It was definitely an experiment. I'll try using the mat again but I'm not sure it's something that will be a regular feature.

Then, earlier this week, I wanted to do an experiment. Something I saw on Pinterest piqued my interest. 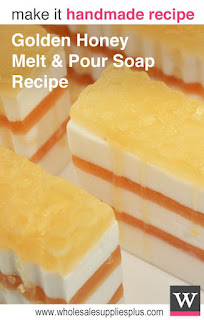 The one in the picture is made from melt & pour soap, something I don't work with. However, it did get me thinking. What if I combined melt & pour with cold process soap. After all, cp soap, made with oatmeal, milk, and honey, is a lovely soap. Using the melt & pour would make the honeycomb layer more realistic that it would look with CP soap. Then, add in the fact that my Voyageur order arrived and it contained a bottle of Oatmeal Milk & Honey fragrance oil, and my decision was made. I stopped in at Michael's and purchased a 2 lb. block of melt & pour base.

Once home, I finalized my recipe to fit in my new mini mold and got to work. First, I lined the bottom of the mold with bubble wrap to emulate the honey comb. Then I melted some of the m&p soap and coloured it with a bit of yellow/gold colorant meant for m&p soap, and poured it into my lined mold to a depth of about 1/2 inch.

Then I made my cp soap. keeping everything as cool as possible. I have read that, when making a combo soap, it's a good idea to spritz the m&p soap with alcohol before pouring the cp soap so I did that, spritzing generously. I know that any soap made with milk and honey can overheat so, to be on the safe side, I put the mold outside for a while. Our temperatures right now are hovering around the freezing mark and I thought that should help keep it on the cool side.

The following day, I unmolded the soap. 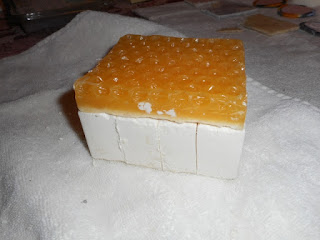 It smells amazing! So soft and, dare I say, comforting? That's the upside. The downside? Well, it came apart. There's also a lot of soda ash on the cp part. 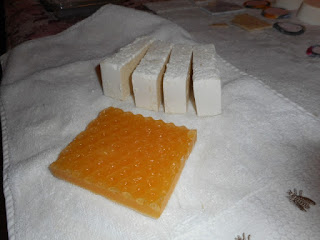 This morning, I'm trying it again. I'll be following some recommendations from fellow soap makers on SoapMaking Forum. The first suggestion was to encourage the soap to gel. Allowing it to gel should bring the heat up just high enough to soften the m&p soap and allow the two soaps to meld together. The other suggestion was, once again, spritz generously with alcohol.

Right now, it's in the oven, which was brought up to about 150°F, then turned off with the light left on. I'll leave it in there for a few hours. We shall see.