You know, whenever I see a headline that starts with "Let's Talk...", my first thought is let's not. In this case, though, it's not a bad thing.

Body Butters are one of those items I have a love/hate relationship with. So often, when I  make them, they end up too hard. They're fine when they're applied but I don't like that hard texture, having to dig it out of a tub. When they're like that, I'd rather use a lotion or rich cream that I can easily scoop out of a tub.

I'm lucky enough to work with a woman who prefers body butter to lotions and has used a lot of them over the years. If anyone knows anything about body butter, and what they should be like, it's her. I've been working with her to find the "perfect" body butter texture and I've finally come up with a recipe that meets her high standards! That's exciting!

One of the things I've learned is that the hard oil to soft oil ratio is important. I've tried recipes that are 60/40 hard to soft and they end up being too hard. They might be fine in warmer months but we're heading towards winter and the final butter is just too hard. I've tried recipes that are closer to 50/50 and those end up being much more along the lines of what I've been looking for.

The final thing that gave me the texture I was looking for was the addition of some Arrowroot powder. It took that skin feel over the top! I'll be putting it in all my body butters from here on in.

I don't think I'll be offering body butter all year round; summers around here just get too hot for them. However, when fall and winter roll around, I think body butters are the perfect offering. And, seriously, a little goes a long way. Seriously!

Here's a short video showint the difference in the texture of the two butters. The second one is just so much more appealing.

I've made a small batch for my next market (Oct. 30), inspired by autumn. One of the oils I used is Pumpkin Seed oil; the butter has been coloured with a combination of Sea Buckthorn oil and a bit of orange mica and it's scented with a beautiful soft fragrance called Autumn Walk. The manufacturer's description is as follows: This delightful fragance perfectly captures the essence of Fall. The scents of brisk air and crisp leaves join woody notes of rich mountain pine, cedar, and golden aspen while whiffs of forest berries, sage, and clove swirl delicately in the backdrop.

Update on the Vitamin C Serum

I've been using the Vitamin C serum pretty much daily since I made it in April (is it really that long ago??) and I'm impressed. 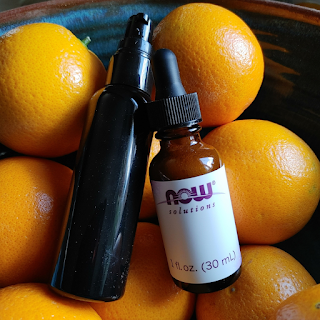 I'm almost at the end of the first bottle and will need to make more soon. Christmas markets, however, are on the horizon and that will require my time and attention before I can make anything for myself.