Sometimes, It's the Simple Things

As a soap maker, I often find myself browsing Pinterest for ideas. There are some amazing soap makers out there... swirls, colours, techniques. Really, some of the soap they make would qualify as pieces of art. I'm serious! Check out this woman's soaps - From Grace to You. She even has a bar of soap that she sells for $300 (US) per bar! I wouldn't be able to decide whether to use it or hang it on the wall, to be honest.

I'll stick with the simple soaps I make. I don't want anyone to be so intimidated that they refuse to use my soap because "it's too pretty". It's meant to get you clean, with some enjoyment thrown in for good measure. Call it an affordable luxury, if you will.

This week, I did simple. We have a small challenge going on in the Ravelry soap makers group, making soap with natural colorants. It's something I've been meaning to do for a while but just haven't gotten around to, never had the push to just do it. This week, I did it.

A month or so ago, I infused two jars of oil with natural colorants, one with Annatto seed powder and one with Turmeric powder. The jars of oil have been waiting for me to put them to some kind of use. Incidentally, the oils can also be used in food making. Both herbs are also food herbs. Annatto is most commonly used in rice dishes, giving it a gorgeous yellow colour (from my reading) and I'm sure everyone is familiar with turmeric, widely used in Asian food.

I chose a low coconut oil recipe and made enough to fill my mold, plus a little extra. I haven't taken pictures of the main soap yet (that will happen later today) but here's a picture of the mini loaf, coloured with annatto and turmeric. Oh, I added a little bit of turmeric into the soap batter as well. 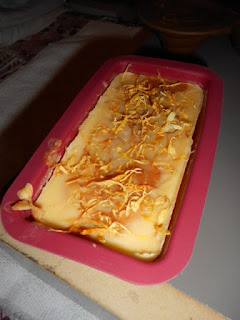 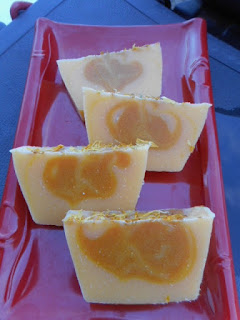 It's very lightly scented with sandalwood fragrance oil and there are calendula petals on the top. Calendula petals can also be used as a soap colorant and it's one of the very few botanicals that doesn't discolour in soap. This picture doesn't show the colour very well. It's much more obvious in the following picture. The scrap that the mini bar is resting on is the end cut of the loaf; some of the batter was left uncoloured to make the natural colours "pop". 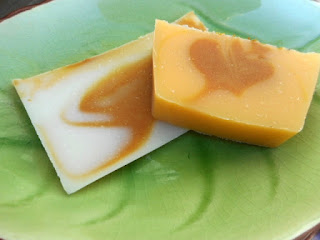 I've already said that I'm always on the lookout for techniques I can implement in my soapmaking. I came across another, very simple, one that I will definitely be using. It was inspired by a pin that lead me to this website - Forest & Fauna - and a way of making your own chocolate chips. I had no intention of making my own chocolate chips but I could immediately see a way of implementing this in soap. 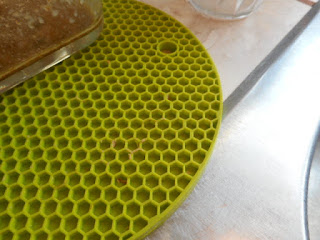 When I made another batch of "My Poop Don't Stink" this week, there was a little bit of batter remaining that wouldn't fit into the molds. Instead of letting it go to waste, I spread it on to one of my silicone trivets, one with a honeycomb mesh. This morning, I unmolded my little chocolate soap chips. Aren't they cute? 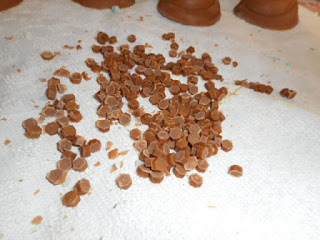 I intend to use them as confetti in a soap batter or as decorations on the tops of future soaps, once I have enough to do something with. They won't all be chocolate, as these are, but multi-coloured. And they're SO easy! 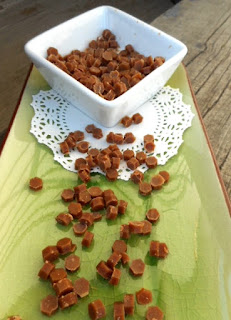 Some Of These Things

Weekends are play time for me. It's my time for soap making. This weekend has been no exception. First up is a long planned Lemon & Poppyseed soap. Whenever I've made it in the past, it has gone over very well. It has just the right amount of "scrubby" and the scent of lemon, orange, and peppermint just smells so yummy!

This one was made yesterday and unmolded and cut this morning. The weather was actually nice enough, finally, to take pictures outside. 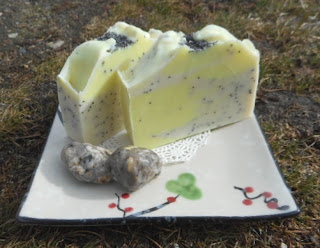 The only (very minor) critique I have about this soap is that the yellow could have been a little more... yellow. It's the first time I worked with Voyageur's concentrated neon colours so I was very light handed. I know for next time, I can use more.

Today, I made another batch of a soap that has become my most popular soap to date, Java Jumpstart. The scent is intoxicating - a blend of cinnamon, clove, ginger, patchouli, and sweet orange - and the addition of cocoa, ground coffee, and oatmeal gives it a scrubbiness that makes it perfect as a kitchen soap. I have a bar of this one in my bathroom at all times.

It's still in the mold (I just made it this morning) and should be ready for cutting by the time I get off work tomorrow. 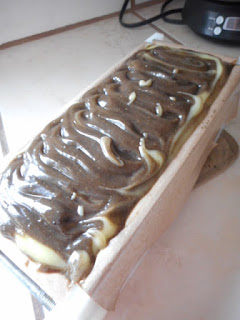 After I took this picture, I decided to change the top up a little. We'll see how it works out when I cut it. 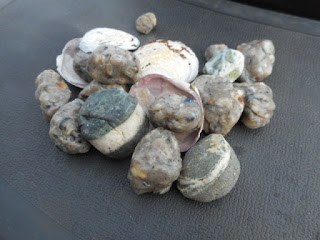 I came across a pin on Pinterest on how to make river rocks with soap shavings and odds and ends. This was a fun little distraction and something I'll do again. There are always bits and pieces that end up in the scrap basket. This is one way to use them up; that and the fact that they're the last piece in a future project idea.

I'm not thrilled. It seems I've been tempting the soap gremlins and they've showed up. As pretty as the Ice Queen soap is, it isn't perfect. 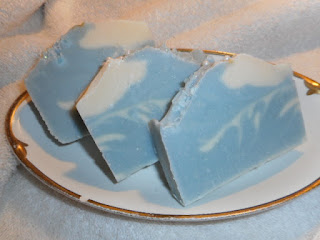 Don't get me wrong. I'm happy with the soap itself. I love the concept of this soap. This particular batch, however, didn't play nice. Once hardened, it was nearly impossible to get out of the mold. Seriously, I had to lay the mold on the floor, put my foot on one edge, and tear the mold apart! Perhaps I should have waited another day or so. I ended up cutting about 1/4" off one edge. So much for not lining that particular mold. Why tempt the soap gremlins more than necessary, right?

Then there were the sugar pearls. I don't think they like the gelling process. 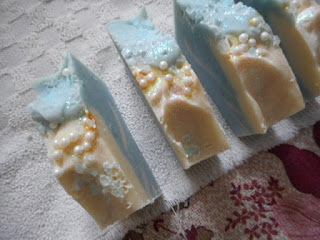 Do you see the orange-y halo around some of the pearls? They seem to have started melting and reacting with the soap batter. I think I'll try another batch, possibly this weekend, to see if not gelling them makes a difference.

I also need to remember that soap does NOT have to be unmolded within the first 24 hours. I was a little impatient with the poop soap. I really wanted to see how it looked so I unmolded one before it was fully saponified. Part of it was left in the mold. Oops.

Patience, grasshopper, patience. Now, how do I appease the soap gremlins and send them on their way?
Posted by Ev at 8:58 AM No comments: