In My Happy Place

I am having so much fun! I've been researching techniques, watching soap making videos, reading about soap and, today, making soap. One technique that has me intrigued is the Dancing Funnel Swirl. It isn't really a swirl but it is, definitely a technique. It, also, doesn't use a funnel; it uses squeeze bottles.

To make it, you pour your soap batter into separate squeeze bottles for each colour. Soap batter is dropped into your mold, first drops of one colour then, on the drops of the first colour, the second colour is dropped. (Gee, that sentence sounds awkward, doesn't it?) If you Google it, you'll see some amazing examples. Go, Google it!

Ok, just to be nice, here's a video I watched a few times before even thinking about trying this technique. She made hers in a slab mold; mine is in a loaf mold but the technique is the same. It's simple but, oh. so cool looking!

I tried it today using two colours, white and ultramarine pink, using the same recipe I used for the Ice Queen (so not blue)/Rose Quartz soap. At the moment it's in the oven, gelling. I don't normally gel my cold process soaps but, in this case, I want the colour to pop as much as possible. As well, I purposely made a larger batch than I knew I'd need so I would have a little extra for experimentation.

Speaking of the Rose Quartz soap, I need to come up with another name for it. The pink has completely disappeared and the soap is now a beautiful pale lavender. When I told Kristen I was thinking of calling it Lavender (or Mauve) Quartz, she immediately replied, "Oh, you mean Amethyst?" Um, yeah. I'm hesitant to call it anything but pretty right now. Who knows whether the colour will morph even more? We shall wait and see. 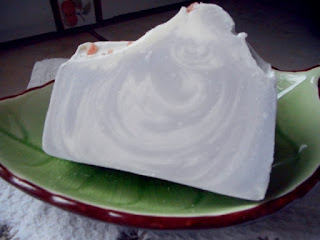 A few weeks ago, I made soap dough in preparation for February's challenge on the Soapmaking Forum. Last weekend, I put together a cane of soap with the intention of using it to "wrap" soap, also called Rimmed Soap. 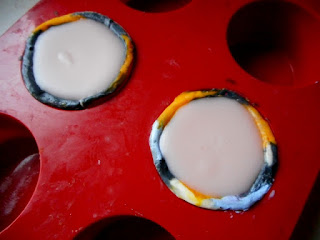 This was just an experiment so there are only two bars; I'll unmold them tomorrow. The center (pink) soap, which was also used in the dancing funnel soap, is scented with Rain from Voyageur Soap & Candle. I wasn't too sure about this scent; it's very strong in the bottle and the one time I did use it in soap, I didn't like it. Again, it was too strong. This time, I only used one teaspoon in a one kilo (oil weight) batch of soap. I'm liking it much better now. Obviously, with this fragrance oil, less is more.

Because it's a little slow at work right now (finally), I was able to take Thursday afternoon off to make my Salt Soap, something I've been wanting to do for a couple of weeks. After giving Kristen an entire batch of these bars for her birthday, I was left with only one bar in reserve. That is NOT enough! 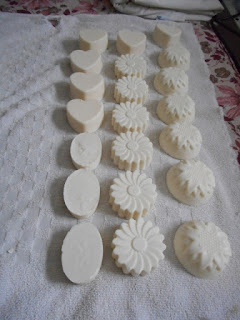 Tomorrow, I'll post pictures of the Dancing Funnel soap. I'm looking forward to seeing how it turned out. Stay tuned!