I have to admit it; I've been very lucky in my soapmaking. In the almost three years I've been making soap, I've had very few failures. Last weekend's dual lye soap is looking really good. It was softer than most soaps I've made coming out of the mold but it's hardened up nicely and is curing in the spare room. 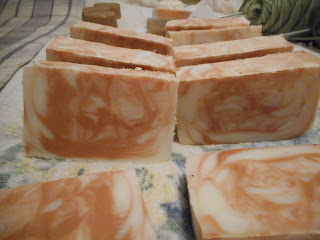 The other soap I made, however, didn't turn out so well.

One of the first soaps I ever made was a Lavender and Goat Milk soap, one that was quite popular and that smelled amazing. It had both lavender essential oil and lavender flower powder and was made, obviously, with goat milk. Apparently, I forgot all the lessons learned about working with milk soaps. 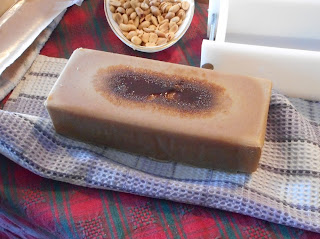 It overheated. When I took it out of the mold on Monday, this is what I found. It's a syrupy, sticky, dark patch. As well, it stank. Seriously. I couldn't smell any lavender at all, just ammonia. I asked for input on the Soapmaking Forum and was told it might get better as it cured. Might being the operative word. Others felt that I should simply dispose of it.

At first, I decided to give it a chance so I left it for another day before cutting it into bars. 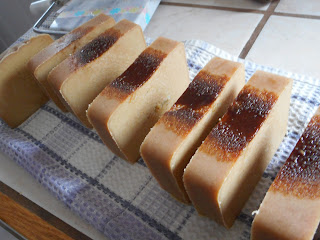 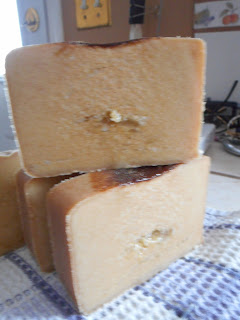 There was a liquid oozing out of the "tunnel"; I was afraid it was lye solution but it seems to be oil. Yes, I did test it for zap; there wasn't any.

Today, a week later, I decided to throw it out. I still couldn't smell any lavender; the ammonia smell is gone but it really doesn't smell very good. This is the first time in almost three years that I've tossed out an entire loaf of freshly made soap. I hope it will be the last.

I did, however, keep these three bars; we'll see how they turn out. They did go through a gel phase but they don't seem to have overheated as badly, probably because the molds are smaller. We'll see how they are after they've cured. 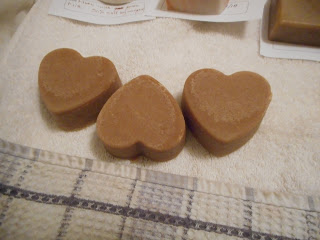 Here are my last three soaps, one bar from each batch, including the overheated Lavender Goat Milk soap, with their curing sheets. 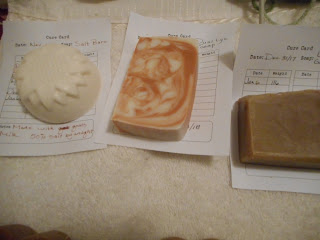