One of the things I love about the Soapmaking Forum is the fact that there are some wonderful, very knowledgeable willing to share their knowledge. One of the things someone suggested as a way of increasing later in a low (or no) coconut soap is to use a dual lye method. My interest was piqued.

I added 1 teaspoon of sodium lactate and scented with cedarwood, rosemary, and lemongrass and swirled with Aztec Gold mica.

Right now, 24 hours later, it's out of the mold but still not unwrapped. It's quite soft so I'll be leaving it to firm up for at least another day. It will be interesting to see how this one works out. 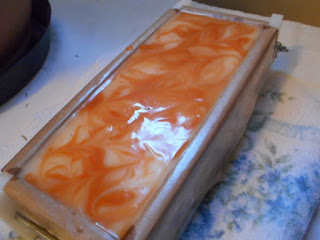 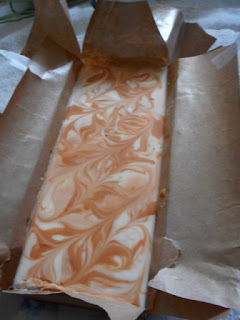 One of the reasons I started this particular blog was so that I could keep track of the batches of soap I've made. Lately, there haven't been very many batches, unfortunately. However, last week, I did make a batch of our favourite soap. When I say "our" favourite, I'm referring to Kristen and myself. There's good reason it's a fave.

With equal parts rosemary, peppermint, and lavender, it smells amazing. Once the soap has cured completely, at minimum 8 weeks and preferably as long as a year or more, the lather is creamy and decadent. It is the only soap I use on my face. 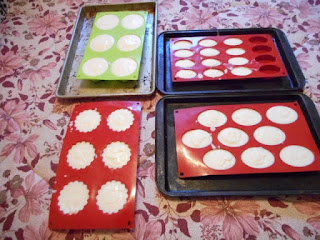 For this batch, I used goat's milk as the liquid rather than water.

There is a thread going on in the Soapmaking Forum at the moment about how long to age salt soap. The consensus is a minimum of one year and up to three years or longer! I think I'll need to make more so we can have some put away for the long term. 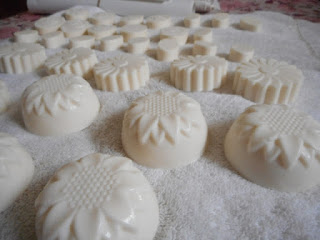 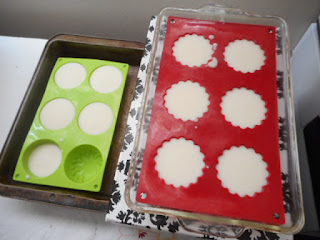 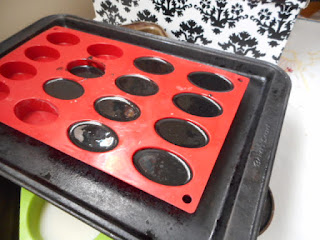 The Tooth Soap bars are small bars, about 1 oz. each (I suppose I could have made a bigger batch... next time). One bar lasts me about four months, with daily use; I only use it at night, though. In the morning, I use regular toothpaste but I find minty toothpastes too strong to use at night. They burn my mouth and the flavour tends to be a stimulant; I don't find that with tooth soap. And, trust me, it's nothing like having your mouth washed out with soap for swearing. Honest!
Posted by Ev at 11:18 AM No comments: