About half way in, I decided to make the first recipe that was presented. It is a hot process soap, something I'd not done before. Hot process soap is usually made in a crock pot; the only crock pot I have is a small appetizer sized one that usually comes free with its full sized sibling. I picked it up years ago at a thrift store and have rarely used it.

The first recipe in the thread was for an 8 oz batch, which fit perfectly into my little crock pot. I followed a two step process; first, the coconut oil and shea butter was melted and saponified with the lye (potassium hydroxide), then the melted stearic acid was added. It went immediately to mashed potato consistency. Afterwards, glycerin and essential oils were added and the whole mixture kneaded together into a log, which I rolled up in parchment paper and allowed to cool. 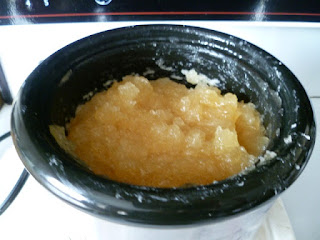 This morning, I cut the log into 1" pucks. This shave soap doesn't become a  hard bar like those made with sodium hydroxide. It's malleable, almost like Playdoh, which makes it easier to lather up with a brush. 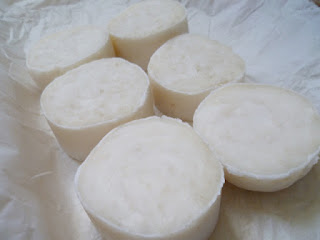 I'm still waiting for John to try it but I can tell you that it sure lathers beautifully. 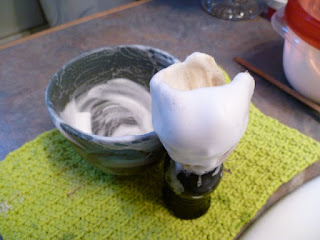 John really needs a new brush; this one belonged to his father and, you can't see it but it has a large piece broken out of the other side that had been badly glued together. I'll see what I can find on my next trip to the drug store, later this week.

That was last night's batch. After reading the rest of the thread, I found another recipe I really wanted to try, for the sake of comparison. It still has a majority of stearic acid and still has coconut oil but has added tallow, lanolin, and shea butter. From what I've read, it may be a more moisturizing soap. John has fairly sensitive facial skin (he breaks out in a rash every time he shaves) so I'm hoping one of these two soaps will be better for his skin than the shave gel he uses now.

Both batches are scented with a combination of bay rum and lime essential oils. I ran the scent past John first as he's the one who will be using it on his face. It met with his approval.

If you're at all interested in making shaving soap, here's a link to the thread about it on the Soap Making Forum:

If you're interested in making your own soap, of any kind, you really should check out the SMF; it's an incredible resource, highly educational, extremely interesting, and filled with all sorts of friendly soap makers who are more than willing to share their wealth of knowledge with anyone who is willing to learn.