Christmas Eve really isn't the time to be making a batch of soap even though I really want to. I just don't want the extra dishes, you know?

It is, however, a great time to do a rebatch of a batch that I was really unhappy with. It isn't making soap per se; it's turning a failure into something usable. A couple of months ago, the Soap Making Forum's challenge of the month was the hidden feather swirl. I did three attempts; the first was an abject failure. There was nothing wrong with the soap but it thickened up way too fast to do a proper swirl. The resulting bars were only about an inch in height and, after unmolding and slicing them, I let them cure and threw them in a paper bag to be dealt with at a later date.

Well, a post on the SMF today made me realize that I have the time today to deal with that batch and, possibly, turn it into a soap I'll be happy to use.

After doing some reading, I decided the best way for me to do it was to use the double ziplock bag method. That's where you grate up your soap and place it into a gallon sized ziplog bag, them put that bag into a second bag and seal it up. Then, the entire package is placed into a stock pot of boiling water and left to simmer until it's one melted mass, which should take anywhere from 30 minutes to an hour. 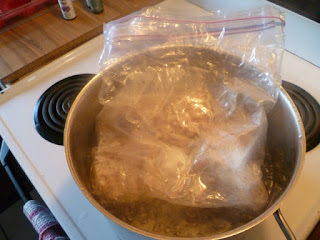 I did add two cubes (1-2 oz.) of goat milk and, once melted, I'll add some scent (lavender and patchouli) and a bit of tamanu oil. If necessary, I'll add another cube of goat milk. Once thoroughly mixed up, all that's left is to snip a corner of the bag and pipe the mass into molds to harden.

Because the soap has already cured, once it's hard, it is ready for use, no need to wait another 4-6 weeks. Once it's out of the molds, I'll post pictures and let you know what I think of the resulting soap.
Posted by Ev at 3:15 PM