That's the theme for January's challenge over at the Soap Making Forum. I'm working on my first attempt right now; it's in a warm oven as I type. Hopefully, my vision will become a reality but I won't know until tomorrow when I unmold it. Just to tease you, I'm calling this one Salt & Pepper. It's unscented as I didn't want to have to deal with accelerated trace.

I also made another batch of salt soap. I tried a recipe a few months back and it has completely discoloured. I've seen so many pictures of white, or creamy white, salt bars but mine have gone kind of yellow and they smell..... off. Not bad, just off. Apparently, they shouldn't discolour like mine did. 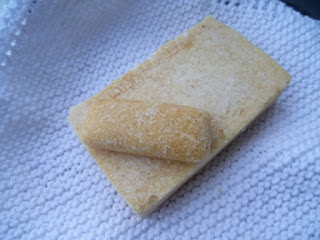 See what I mean about the discolouring? I'll be tossing that batch and deleting that recipe. One of the opinions on the Soap Making Forum is that there wasn't enough salt in the recipe (I'm not so sure about that but...). This new batch has about 65% of the oil weight as sea salt. Hopefully, it won't discolour and I'll get to experience what so many others have been raving about.

It, too, is in the mold, individual silicone molds, hardening up quite nicely. I'll post pictures then.