I'm a Pinterest addict. I freely admit it. Don't judge me too harshly, though. I do come across some good stuff occasionally and I have pinned some good stuff, too, as I've come across it. In researching soap and techniques,  I came across a "Humblebee and me" post about Dead Sea Mud soap. Then, while I was doing a bit of shopping on the Voyageur website, a tub of Dead Sea mud managed to make its way into my cart.

Today, I made her recipe, more or less as written. Marie uses tallow in her recipe; I think I still have a tub of tallow, buried deep in my freezer. I think. I know I have lard so I reformulated the recipe to use lard instead of tallow. (Both make great soap, by the way.) Apart from that minor change, I followed her recipe.

The batter took a while to come to trace but, I have to say, it looked so silky I just wanted to dip my fingers in to feel it. That is never a good idea when it comes to fresh batter so I didn't but.... I wanted to. The soap is in the spare room now, saponifying, doing its thing. 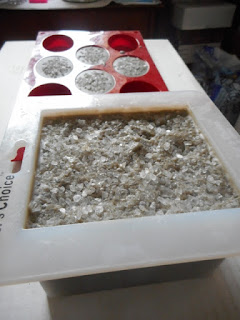 It's scented with Petitgrain and Mandarin Orange. It smells lovely, almost old fashioned and, as she notes in her post, it's a heavy soap. I've never used Dead Sea Mud before; it has a distinctive odor. John says it smells like the bottom of a pond and, I suppose, when you really think about it, this IS mud from the bottom of a lake. It's very earthy, salty, vegetal, deep.

This morning, I unmolded and cut the Salt & Pepper Soap. I was kind of surprised at  how hard the soap was already. Other soaps, after 24 hours, aren't nearly as firm as this one was. It's probably because I gelled it, while most of my soaps are not gelled. Cutting it revealed the glycerin rivers I was hoping for, as well as the salt halos I was looking for. Interestingly, a lot of soapers see glycerin rivers as a flaw; I want them in this soap. I could have used more Activated Charcoal and have made a note to that effect in the soap recipe. All in all, though, I'm happy with it. 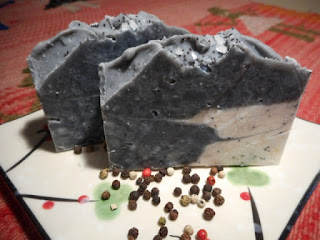 Last week, I received an Amazon order that had a couple of mini shell molds. I wanted them so I could make some embeds, especially for a soap I'm planning out. It will have a seaside/beach/ocean theme and shells will, of course, fit right in. Using a bit of the batter from the Salt & Pepper soap (and I do mean a bit... no more than a couple of tablespoons), I made these... 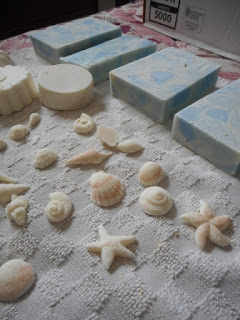 The largest of them is no bigger than an inch across. The stripes (pale brown) are painted on with a mica in glycerin. It soaks into the fresh soap, leaving the colour as more of a stain than anything else. I'm looking forward to using these in an upcoming soap and will be making more with little bits of whatever soap I'm making in the interim. I already have a few in the mold using the S&P batter.

I'm also looking forward to incorporating more of the melt & pour soap into future products. Suddenly, soap making is so much fun again!