It has turned into a weekend of soap making, it seems. After all of the spin swirl attempts, I decided it was time to make some "real" soap. I've been wanting to make more of the Dove copy soap, which I'm calling "Paloma", as I have only one bar left. I love that soap!

I also downloaded a recipe from the Soap Queen that I've been wanting to try for some time now. It's one called Juicy Orange and Sweet Rose soap. She topped hers with dried orange peel and rose petals. I don't care for all that stuff so didn't bother with it. It all just goes down the drain or into the garbage anyway. In the picture, the one at the front is the Juicy Orange soap and the one at the back is the Paloma. 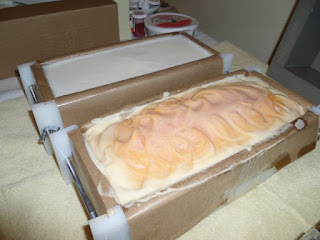 Already, after only three hours, the Paloma soap is almost hard enough to take out of the mold, even though it's still warm. It's made with all hard oils (coconut, palm, palm kernel, stearic acid, and lard) and hardens up to a nice hard bar. As I say, it's one of my absolute favourites. I scented it with a bit of patchouli, very lightly.

The Juicy Orange soap is scented with Sweet Orange essential oil, only in the orange part. It's an in the pot swirl that I'm hoping swirled nicely.