Ok, I know that challenges are supposed to be challenging; that's the whole idea, right? Well, I'm finding this month's Soap Making Forum challenge to be more so than the others I've participated in. This month's challenge is a spin swirl. Here's a link to a Google image search for spin swirl soap.  Gorgeous soaps, aren't they?

My first attempt turned out nothing... and I do mean absolutely nothing!... like any of those. 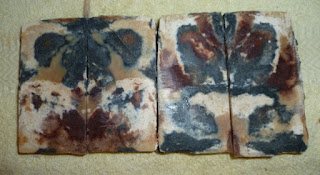 In my head, I had envisioned something that looked like striated rock; I'm not sure what my attempt looks like but it certainly doesn't look anything like what I saw in my imagination. I used what was supposed to be a slow tracing recipe but, by the time I added my colorants to each of the four cups of soap batter, they'd already started thickening up. By the time I was halfway through pouring, I was plopping the batter into the mold (which, incidentally, was a 4" x 4" x 4" cardboard box). Spinning it was almost painful because the batter was already so thick it barely moved.

After that failed attempt, I decided to wait a while, regroup, make something else. So, last weekend, Trinity and I made more bath bombs. I let her decide on scent, colour, and mold. She made great choices! 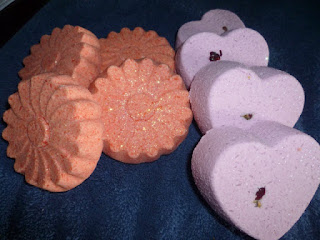 Aren't they pretty? The hearts are the ones I made a week before. The orange flowers are Trinity's choice. They're scented with sweet orange essential oil and enhanced with a bit of iridescent glitter. This weekend, I'll have the kids come by and put together their teacher gifts for Valentine's.

I also made some hand cream, with Trinity's assistance, and we'll round out the gift with a bar of soap and some homemade lip balm (the good stuff... the one with emu oil).

I did learn that the regular silicon molds are not the greatest for bath bombs. You really can't pack the mixture in without the mold stretching. The heart mold was fine; it's made of sturdier material than the flower mold. That's a bit disappointing  but they still look okay and smell amazing!

With all of that under my belt, I started thinking about the spin swirl challenge again. I scoured Pinterest, looking for inspiration. I planned. I discussed with John. I settled on one idea.

Last night, I prepared my batter. No exotic ingredients. Water for the lye, not beer. Colour only half the batter. Slow tracing recipe. No wine (never drink and soap!).

I set to work. After the batter was made, I separated it into two measuring cups and added my colorant, mixed with a bit of oil, to one half and began my pour. Even though the batter was very liquid, it didn't take long before it was thickening up. Again, by the end, I was plopping it into the mold. This time, however, it was still fluid enough that I could spin it.

Spinning it was fun. The first time I did it, I wasn't sure how enthusiastic I could be. This time, I set the box on a lazy susan, used a skewer in the center of the soap batter to anchor it and spun it around, then stopping it suddenly.

Once I thought I'd spun it enough, I put the soap into a warm oven and walked away. Before going to bed, I moved it into the spare bedroom and let it sleep with a heated neck warmer, in a wooden box. This morning, I unmolded it. You can see that there was definitely movement in the batter. I also got the start of what I think is "alien brains", a rippled effect that happens when the soap overheats. I do love the colour, a very pretty lavender. I know someone else who will love it, too. Purple is Trinity's favourite colour. 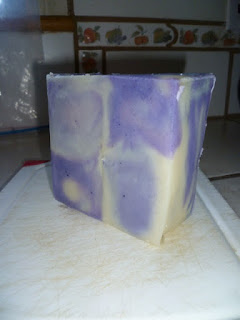 The bottom of the soap. I won't show you the cut bars because, for now, I think this will be my entry into the challenge. Unless I decide to try again.

Once I decided it was deep enough in the mold, I poured the remainder of the batter into my newest soap mold, the one with the perfectly sized hand soap bars. 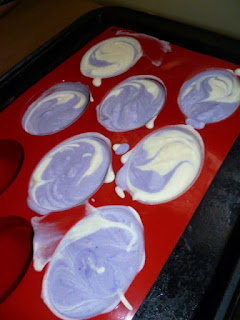 These are still in the mold this morning as they're still a little soft. I'll check them again this afternoon. I must say, I do love that colour!

There will be more soap making this weekend... I might even decide to try the challenge again.