This month's challenge on the Soapmaking Forum is a hidden feather swirl. I've already made two attempts at it and, although I'm not unhappy with my second attempt, I'd like to try it once more, just to see if I can make it even better.

My first attempt was a dismal failure. 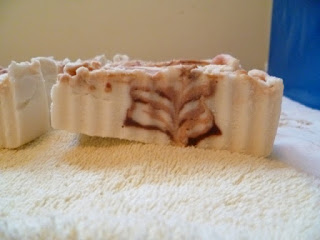 There's sort of a feather there but the soap went to heavy trace before I could get it all into the mold. The squeeze bottles I bought for the swirl were absolutely useless and half the soap batter eventually went down the drain because I couldn't get it out of the bottles. The bars are about 1" in height. Eventually, I'll rebatch them into something else.

My second attempt was better; I won't show pictures of the cut bars (apart from the mold end) until the third try has been cut and compared. That time, the batter was too thin and the colours ran together. My feather swirled off to one side, as if being blown in the wind. I used the same colour combination above - cocoa, bronze mica and copper mica. 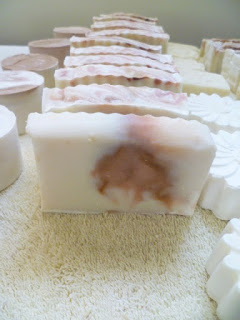 The final bar is smooth, hard, a soft white, with a very pleasing feel in the hand. I left it unscented as I'm not huge of scented soaps. This next batch, however, I might scent; I haven't decided yet. It should be ready for use by October 31.

The recipe I'll be using for the third try is the same I used for the second. It was provided by the moderator who came up with the challenge.