With one batch of beer soap under my belt, I decided to try another and tweak it a bit. The first thing I did was to use a different, tried, recipe. I went back to a recipe I know works well, the one I use as my confetti soap base. It's a simple recipe with coconut and olive oils, using the beer as the liquid.

Once the batter came to trace, I coloured approximately one third with titanium and coloured the remainder with cocoa powder, made into a paste with a bit of safflower oil. Again, I used a hanger swirl to make it look like the foam in a glass of dark beer.

I'm much happier with this batch which, incidentally, is scented with a blend of cedarwood, patchouli, and peppermint (1 part each of the cedar and peppermint, 3 parts of patchouli). 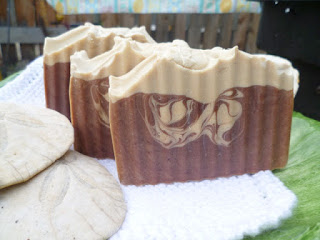 I think this recipe is one I will be going to time and time again. It works, it's a nice hard soap and it's easy to modify.