At the end of 2018, I did a little experimenting with making a cream soap. After making it, it was to "rot" (or cure) for about 6-8 weeks before using. I did play with it a little bit - I think I made a sugar scrub - but I eventually forgot all about it. Last weekend, while cleaning out the spare room, I thought about it again and dug it out or rather, brought it out into the open.


This morning, I decided to play with a bit of it. First, though, I went back to the Soapmaking Forum and did some more reading about cream soaps. I came across a post that mentioned blending it with a bit of thick cream/lotion and decided that was the route I would take.

I used 50 grams of the cream soap, blended it with 10 grams of the lotion base that had been melted into 15 grams of boiling water and mixed up really well. Then, I added 10 drops of fragrance oil. I used Candora's Stormy Nights, which combines floral notes of hyacinth and heather with leafy, green notes. (It's pretty strong on the hyacinth out of the bottle.)


Once all that was done, I took my husband's shave brush and lathered up! I was fairly impressed, to be honest. Next time he shaves, I may get him to try it just to see what he thinks. I tried it on my legs and was pretty happy. That said, my legs were pretty dry to begin with and I really needed to moisturize quite a bit after shaving.


The next test will be trying it on my face, just to see how drying (or not) it is. I'll report back when I try it.

I am now officially unemployed. Today was the first day of my social distancing. I will admit that I'm relieved not to be going to work every day and it's giving me time to get some things done that have been waiting for quite some time.

The market opening is still an uncertainty; it's scheduled to start in May so everyone is in wait and see mode. Because I've been making soap all winter for the upcoming season, I'm well stocked and have decided not to make any more at this time.

For any of my local friends and customers, if you are in need of soap, please contact me. I'd be happy to arrange curbside delivery or pick up. In the interim, stay well, wash your hands often, and remember to practice social distancing.

See you on the other side of all this.
Posted by Ev at 5:06 PM No comments:

At the beginning of my 2019 market season, I decided that I should stock some very basic soap, something that would be gentle, pure, vegan friendly. I came up with two such soaps. The first of those two was the Charcoal and Lavender Castile soap, made with sea water (from the West Coast), olive oil, and a bit of coconut oil and castor oil, coloured with charcoal and scented with lavender essential oil. The second is the pure Castile bar.

This one is the same base recipe as the Charcoal and Lavender Castile but with no colours and no fragrance. One of the downsides of a true Castile soap is the slimy lather. With the addition of salt water, coconut oil and castor oil, that sliminess is minimized. This is a very gentle soap, perfect for all skin types.

And there's just something about a plain white bar of soap, don't you think?

I've been trying to come up with ideas for some new soaps and, in chats with other people, I've come up with some interesting ideas. One idea is to make a line of Okanagan-themed soaps. 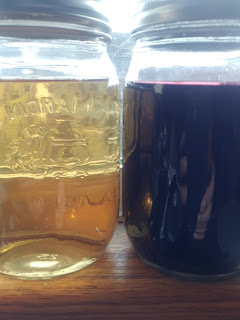 To that end, the jars above are filled with something everyone in the Okanagan knows about. On the left is white wine and the jar on the right is red wine. For each, I've reduced a bottle of wine to almost two cups of liquid. At some point in the near future (when some new colorants arrive), I'll be making soap with each of those. There is nothing more Okanagan than wine and I've made soap with beer in the past so why not wine?

I'm still trying to come up with a few more inspirations for this line. Any ideas?
Posted by Ev at 11:16 AM No comments:

So, now that I have these lovely new tools, I should be making soap so I can use them, right? Last weekend, I got on that. I decided that the first soap I made should be a marble soap, a soap that is first cut horizontally to show the marbling, then cut vertically into bars.

This recipe uses shea butter and I like to buy the raw shea, not the processed. It's quite yellow and it does colour the soap somewhat; I know that and I don't mind at all. I chose to try a new to me method of making the soap batter, the heat transfer method. That's when you measure out the solid oils, then mix the lye solution and add it to the hard oils. The heat created by mixing the lye and liquid is usually enough to melt the solid oils. Then the liquid oils are added and you proceed as you normally would. In theory, I liked the idea of this; it is a little faster as you're not waiting for the lye solution and the oils to cool to the same temperature, which can take up to an hour. In this case, though, the recipe is mainly hard oils and the lye solution was unable to completely melt the oils so I had to add some heat until all was melted; then I added the liquid oils and fragrance (Black Tie from Candora). Pouring is done in blobs and layers, with mica sprinkled on between pourings.

Normally, this recipe can be unmolded and cut within 18-24 hours; this time, it took a full 48 hours before I was unable to take it out of the mold to cut. It was very difficult waiting as I really wanted to try the new loaf cutter. Oh my! I am so happy; it was a joy cutting this batch. I've had to tweak the height a little (2 popsicle sticks worth) so I don't end up with too large a left over slab but it's so nice to have even bars of soap. And the bar cutter? Why did I wait so long?? No more wonky, different sized bars!

Using the planer gives the bars a lovely finished look that I'm really liking and it's so easy to use!

This weekend, I restocked a soap that sold better than I had anticipated. I've noticed that my customers usually look for nice smelling and fairly colourful bars of soap. This one is neither. It is unscented and uncoloured, as pure a soap as I can make. It's the No Slime Castile soap, made with a recipe shared by one of the Soapmaking Forum members. Her recipe calls for faux sea water, made with salt and baking soda. However, I asked my daughter's SO to bring me some sea water from the coast and he brought me about a gallon of it.

With the addition of the sea water and a bit of coconut oil and castor oil, this is a lovely mild soap, one of the purest soaps I make. Castile soap, a true 100% olive oil soap, can have somewhat slimy later; this one doesn't. It really is a lovely soap and there's just something about plain white soap that is pleasing, don't you think?