I did it! Kristen bought me the beer this week; the same night, I boiled it down to make a more potent "syrup". I dissolved the lye in the beer syrup a couple of nights ago, very slowly and deliberately. Last night, I mixed my oils. Today, I made the essential oil blend and tonight, I made my beer soap. 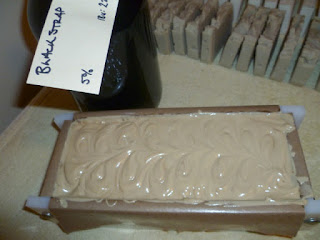 The ale Kristen bought for me is BNA's Blackstrap Ale, a nice dark ale that smells of molasses. The bottom part of the loaf is lightly coloured with cocoa, just to darken it up. The top has been lightened with titanium dioxide to mimic the foam. I did a hanger swirl between the layers, which will, hopefully, mimic what it looks like as the ale is poured into a glass.

Since I poured the batter into the mold, I've put some copper mica on the top, just to give it a polished appearance. I might regret that... we'll see.

I scented the soap with a blend of Dalmation Sage, Cedarwood, Lime, and Patchouli essential oils. Again, I'm not sure of the scent but I didn't put a lot of scent in it. I hope it will be alright. It was difficult to decide what to use. I may rethink that.

Kristen told me this evening that the guys at BNA are very interested in trying the soap. I'll know by tomorrow whether or not this experiment is worth pursuing and perfecting; I think it will be.