With so much soap having gone out the door these past couple of weeks, John has finally realized that more soap needs to happen. He's also committed himself to learning how it's made. 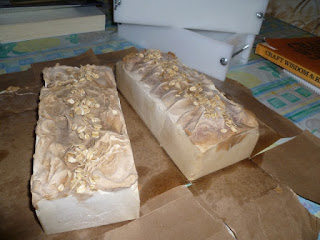 I did have to go out to get more olive oil pomace and another bottle of vetiver essesntial oil, even though my least favourite thing to do is go shopping just before Christmas. I hit it right, though. The essential oil was the more difficult of the two items. I had to go to three different places in order to find it, including.......... the mall. Yes, I braved the mall. Needlessly.

After we had finished the first batch of Sweater Weather, John said we might as well make the second batch right away. However, there wasn't enough olive oil for another batch so another trip had to be made. We discovered that the best place to buy it is at the Save On More closest to our home. John suggested trying the Mediterranean Market but they're further away and their prices are about the same.

Interestingly, after I unmolded the soap last night, I tested both for zap. One still zapped but the other didn't. I wanted to illustrate to John what zap was so I rubbed a wet finger on to the zapping soap and put it on his tongue... nothing. No reaction whatsoever. He figures it's because he's a long time smoker and his taste buds have become desensitized. I guess I can't use him to test the soap's zapability; I'll have to rely on my much more sensitive tongue. And he needs to quit smoking. 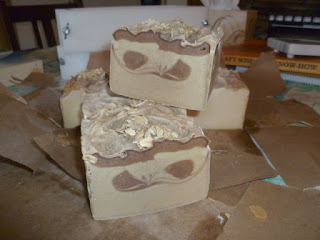 Making the two batches has depleted my stock of palm oil, so I've put in another order with Voyageur Soap & Candle. I don't anticipate seeing the order until early in the new year so if I want to make soap between now and when the order comes in, it will have to be without palm oil.

With this order, I've also ordered some potassium hydroxide (caustic potash); I'd really like to try making a liquid soap and a true shaving soap. Now, though, my mind has turned to Valentine soaps; I'm trying to come up with a recipe for a soap that would reflect that day and it isn't easy. I want it to be a luxurious blend of oils and scents. I'm not over thinking the aesthetics of the soap; I'm not into making works of art. I do, however, want it to be something lovely.