After the stress and emotional upheaval from the past month, it's been really nice to be able to put it all behind us and move on with the healing process. It sounds simplistic when I write it like that but it's true that the funeral has been a way of putting paid to the entire situation.

This weekend has been spent in pampering myself with hot baths, hair masks, facial treatments, cooking, knitting, and making soap. On Friday, it was the Sweater Weather soap and some much needed lip balm; yesterday, I decided to make some tallow based soap, in addition to some tallow balm. 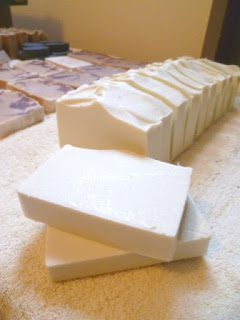 A couple of months ago, I was able to score two quarts of beef tallow from my (very) local butcher (within walking distance). It's been in my refrigerator, waiting for the perfect time and the perfect recipe. Yesterday was that time.

The recipe I used is a variation of one I found online, using oils and milk I have on hand. I think the original recipe used sunflower oil and water to dissolve the lye. John cleaned out our freezer yesterday and reminded me that I still have coconut, goat, and hemp milk cubes in the freezer. Because of that, I decided to substitute the sunflower oil for hemp oil and use hemp milk instead of water to dissolve the lye.

I did squirt in about 2 tsp. of titanium dioxide (to make the soap less green from the hemp oil) and added 2 tsp. of sodium lactate, and 2 tsp. of simple syrup (1:1 sugar water).

It seems I've been on a bit of a patchouli kick lately; I added about 1 tsp. to this batch, giving it a very light scent.

While I was out and about yesterday, I stopped at my favourite kitchen shop and bought a wire cheese cutter. It has definitely made cutting the soap easier; I just need to get used to it. The soap slides a bit on the board and tends to be pushed around by the wire. If anyone has any suggestions for making it more stable, I'm open to them. Just leave me a comment.
Posted by Ev at 9:36 AM