Christmas is now behind us and I'm off until the new year. That gives me plenty of time to play with soap. Well, it gives me time but I'm waiting for an order to arrive from Voyageur. I'm out of palm oil. The order is in Kelowna but I have all my orders delivered to me at work and, being Christmas, we're not open until Tuesday. I've told the guys to text me when it arrives. No, I'm not impatient... not at all. HA!

Even though yesterday was Christmas Day, I decided to pull out my tiny crock pot and rebatch some ends from the beer soap batches I've made. After chopping all the bits up, I threw them into the crock pot, pretty much filling it, added some water and walked away. After a couple of hours, I mixed it all up and poured it into molds. It will take a while to harden enough to remove from the molds but that's no big deal. I don't mind letting it sit until some of the water evaporates.

The rebatch I did on Christmas Eve is out of the molds and when I say it's ugly, believe it. It looks like raw ground pork, frozen into flower shapes, just nasty. However, it will be used as kitchen soap so, as long as it lathers, it should be fine. The original soap was lovely soap, just not pretty. 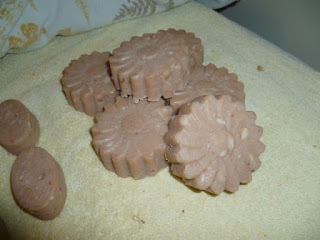 See what I mean? It wasn't completely smooshed together but I don't think that really matters much. It was pointed out to me that I probably shouldn't have added goat milk to it because it might cause the soap to go rancid more quickly. If so, I'll toss the batch; I really haven't lost much.

Anyway, I digress. Today, being Boxing Day and me not being the type to be drawn in to the Boxing Day shopping fray, I decided it was a good time to try my hand at the Ghost Swirl, made famous by the fabulous Auntie Clara (http://auntieclaras.com/2015/09/the-ghost-swirl/).

Here's how it looked right after getting it into the mold. The lighter parts are the low water parts and the part in the middle is the high water part. 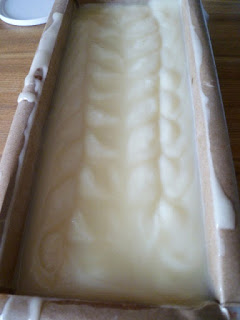 It's in the oven now, and will be for another half hour or so. Then, I'll move the mold to the bedroom with a cover over it because we will need the oven to warm up the left over prime rib we had for our Christmas dinner yesterday (it was amazing!). 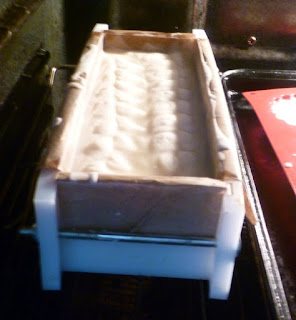 I'm curious to see how it will turn out. Incidentally, I scented the low water part with lavender and patchouli, with no scent in the high water part.

The mold had two dividers and the high water batch went down the center while the low water batch was split between the two sides. Once filled, the dividers were removed and I did a Taiwan swirl.

I'll leave it in the mold overnight (if I'm patient enough) and will cut it tomorrow. I'll take pictures and will post the results tomorrow afternoon. I'd post in the morning but my sister and her husband will be in town before heading out to the coast to visit our family there.
Posted by Ev at 2:16 PM