I have to say, I'm somewhat surprised this soap turned out as well as it did. As I wrote yesterday, I substituted beer for the water but, otherwise, followed the recipe as written. I made a small batch, with 8 ounces of oils.

Once it reached trace, which was pretty quickly, I poured it into individual silicone molds. The recipe made almost four bars. 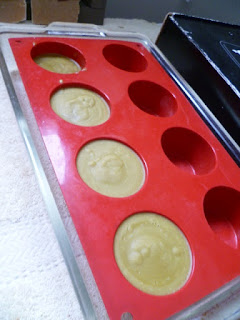 I was able to unmold after about four hours, which was a lot faster than I'd anticipated. Yes, it was a little on the soft side and one of the bars was dented when it tried to escape (it rolled under the spare bed) but, all in all, I'm calling this experiment a success so far.

Time will tell whether the DOS (Dreaded Orange Spots... a sign that the oils in the soap have gone bad) gremlins will show up but I'm thinking this might just be a very nice soap. I tried a little sliver that came off of the smallest bar when I unmolded it and I did get a good amount of bubbles... after only 24 hours!

I think I'll use the smallest of the bars as a sample bar and test it once a week to see how it develops. I'll let you know how it goes.