Bath Bombs and a New Challenge

When I flipped the mold with the bath bombs over last night, I was surprised to see that all the bombs dropped out of the molds with no persuasion. I am impressed. 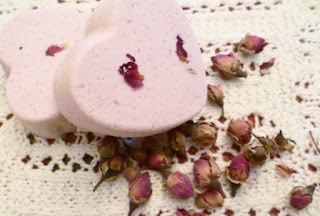 They smell amazing, too. Even though I forgot to put a bit of glitter into the molds yesterday, I sprinkled a little glitter on the bath bombs today and they look even better.

As far as soap goes, I'm feeling a little uninspired. Or, I was until the February challenge was posted on the Soap Making Forum. This month's challenge is a spin swirl, something I'd never even heard of. After doing some researching on Pinterest, John and I decided it might be fun to try. Yes,  you read that right, John and I. We came up with the theme of "wood".

I showed him the thread with all of the black & white entries and he started critiquing each soap by "masculine" and "feminine". When I showed him what a spin swirl is, he suggested something "male". Neither of us cares for brightly coloured soap but when I showed him a wood coloured soap, he thought it was kind of cool, especially considering that the guys around our place are into renovating, building, and burning wood. He thinks it will appeal to the men in my life. I agreed.

All I'll say for now is that it's in the mold. I used a small box, 4" x 4" x 4" and a recipe for 1 lb. It was supposed to be a slow tracing recipe but I've learned that when you use beer as your liquid, you will accelerate trace. It traced so fast I didn't even have time to add scent. We shall see how it turns out.  I have a feeling I'll be trying it again.
Posted by Ev at 1:23 PM