The Right Tools for the Job

As a maker, I'm of the firm belief that you should splurge on the best tools you can afford for the job you're doing. In soap making, you can improvise easily. Molds can be made out of cardboard boxes, Pringles containers, plastic tubs, silicon muffin cups, almost anything really; cutters can be as simple as a sharp knife or a small wire cheese cutter.

However, if you're doing any kind of production and you want consistency in bar size and shape, you do need to invest in some equipment. The past two weeks have been all about that -- investing in my little business.

I've had my eye on a couple of pieces of equipment for a while but really couldn't justify the expense... until now. We decided it was time to invest in Mission Meadows Soapery. One of the tools I ordered is a bar cutter. It's the same idea as a wire cheese cutter but on a larger scale. 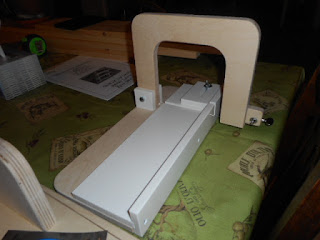 This should eliminate the uneven bars I've been getting, even with an improvised stop on the cheese cutter. An entire loaf can sit on that tray; no more balancing the loaf on a six inch slab of marble while it wobbles while trying to cut it.

The second piece of equipment is a loaf splitter. I don't make many batches in a slab mold but there are some soaps I make that are best cut horizontally first, then into bars. Until now, I've had to use a knife for that and it's been awkward, to say the least. Enter the loaf splitter... 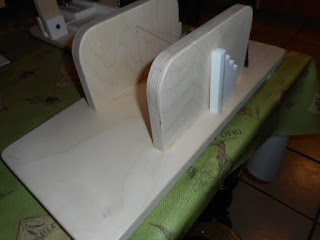 It's adjustable from 1/2" to 3.5" in height and should make quick work of cutting the loaves and it opens up a world of design ideas.

Until now, I've been using battery operated kitchen scales to measure my ingredients. I have two such scales and they've been okay. Lately, though, my "good" scale has been frustrating me no end and there have been times I'm not sure I have the right measurement of an ingredient. If it's something I'm making for myself, I'm not too concerned but if I'm making something that I'll be selling, I need my scale to be accurate. It was time to upgrade the scale.

This is the MyWeigh KD 8000; it can be powered by batteries (3 AAA) or it can be plugged in. That is just what I need! This scale has a 30 year warranty (it will outlive me, most likely!). There's a plastic cover over the front panel and I've been told by numerous soap makers to use the cover. It's there to protect the scale from spills and oopsies (yes, that's a word). It measures down to the gram (for anything smaller, I have a jeweller's scale) or .01 oz and up to 8000 grams (8 kilos). It's known to be a workhorse of a scale. 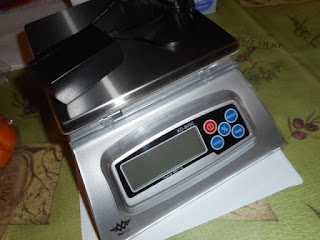 To round out my investment, I also decided to splurge on a small planer, used to bevel the edges of the soap bars. When the bars are cut, the edges can be "sharp" (if you can call soap sharp). Realistically, after a wash or two, there are no more harsh corners but beveled edges just give the soap a more polished appearance. This is a small hand plane from Kakuri, a Japanese company. 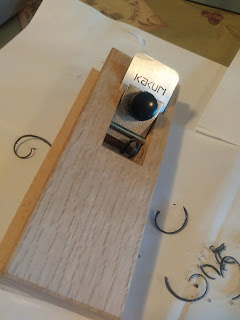 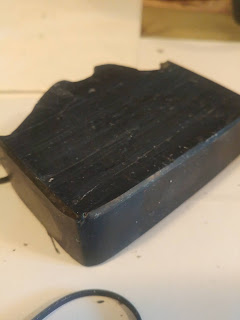 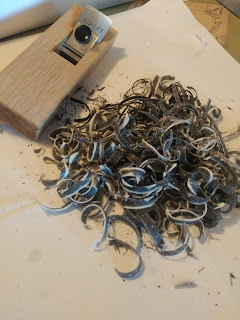 I have two loaves that have been curing in my soap room and are ready for wrapping. I decided to test out the planer on the two loaves, 18 bars. It took just minutes to bevel all eighteen bars and I like the finished look. Now, they just need wrapping. The trimmings are in a paper bag and will be used in a future batch of confetti soap.

I love all my new "toys". Now, I just need to make soap! Until now, I've been somewhat uninspired but ideas are starting to swirl around my brain. No soap making today, though. Today will be spent with friends and family. Tomorrow though......