All Signs Point To...

Fun! I've been having fun.

Last weekend, I made another batch of soap, which I think is enough to get me through the first half of the market season. This time, I wanted to use some of the Green Apple fragrance oil that's been languishing in my stash. I do use it for shampoo and conditioner bars but I thought it would be really nice in a soap, too. I wasn't wrong. 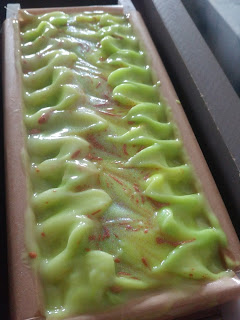 It smells so fresh and so clean! My entire (albeit small) house smelled of green apples. I'm ambivalent about the mica on the top but it's too late now. If you've been checking out my gallery page, you will already have seen the cut of this soap. I'm very pleased with the result. 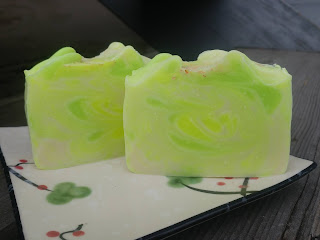 I probably could have coloured more aggressively but I'm pretty happy with this. The swirls are subtle and the fragrance is perfect. I have a feeling this one will be sold out quickly.

I HAVE been having fun this week. It's been a week of reflecting and planning for the upcoming market season. One of the things that has been a bit of a frustration is my table signage. I don't mean the main signage (I have a small banner which I love) but the product signage. I've been using small wooden blackboard signs that are handwritten as needed; I want to get away from handwritten signs and have been looking for ideas to that end.

Pinterest has been a source of inspiration many times and this time was no exception. I came across several pins with cement/concrete crafts and, suddenly, inspiration struck. What if I were to use concrete and paper clips? The concrete base would ensure stability; the signs wouldn't easily be knocked over (as I am wont to do) and the paper clips would hold my printed signs in place. I decided to give it a try.

Home Hardware carries Quickrete in buckets (rather than buying a 50 lb. bag) so, armed with that, a square silicone ice cube tray and some large paper clips, I got creative. 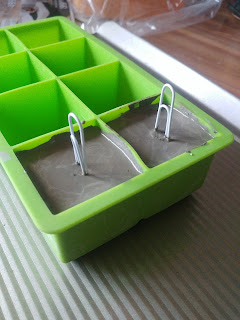 Each cube holds about 1/2 cup of the cement mix; I added more water than the 1:5 ratio recommended because I wanted to be able to pour it rather than "glop" it into the molds. John suggested bending the end of the paper clip that would be sitting in the mix to give it a little more stability - a good suggestion. Because of the added water, I put the tray in the oven, with the light on, for a couple of hours, then let it set overnight. By the next morning, I was able to unmold easily.

I let them set up for a day then decided to paint and seal them. I love the look of the finished bases and I think they'll work well on my table, on which I use an olive green table cloth over a black table cover. I used a dark gold/bronze spray paint and sealed them with a clear coat. From what I've been reading, they'll probably lighten up somewhat after about a month, by which time they'll be fully cured. 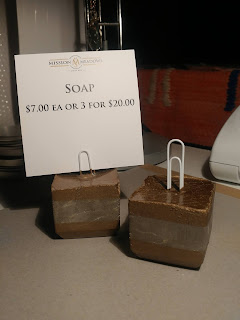 I like them so much that I decided to go ahead and make the rest of my bases this morning. I figure I'll need about a dozen for all the signs I'll need, maybe a few more. This time, after more reading, I decided to add some water soluble titanium dioxide to the mixing water, to help lighten the colour of the natural cement. I'm hoping that will give more of a contrast between the gold and the concrete. 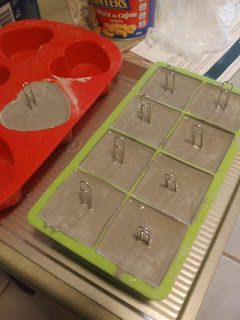 This has really been a lot of fun and far easier than I thought possible. There's just one "problem". I still have more than half a bucket of the mix left and nowhere to store it. That means I'll have to make something with it; I've seen a lot of amazing ideas. Now, I just need to decide.