What To Do With Leftover Whipping Cream

In looking at my soaping supplies, I realized (well, I already knew) that I was really low on coconut oil. I didn't want to run out just to pick up another kilo of it so I started looking around to see what I still have. I have palm oil, and palm kernel oil, plenty of both to do a few batches. I still have olive oil, beef tallow, and castor oil. Then, I realized that I still have almost a full quart of whipping/heavy cream in the fridge that needs to be used up soon or it will go to waste.

Time for some SoapCalc one on one. I came up with a recipe that has numbers that look good, using all the oils mentioned above, as well as whipping cream.

I thought about how it would look and decided that, because whipped cream is a lovely creamy white, my soap would be white on white. I figured I would do a lighter white (brightened with titanium dioxide) hanger swirl and use some to help decorate the top, and I would sprinkle it with a very light dusting of an opalescent glitter, just to add a touch of glitz.

For scent, I scoured a web site I joined recently, Diffuser Blends, for a scent that inspired me and came up with one using lemongrass, lavender, and peppermint. I was ready to begin!

I'm really pleased with the way this one came out. It was somewhat slow to trace but that's not always a bad thing, especially if you want to do a swirl. It smells amazing and I love how it's looking so far. I have it resting outside (just above freezing here) because I don't want it to overheat. 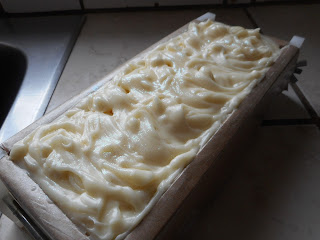 I'll cut it tomorrow and post a picture of the inside. I'm hoping it turns out as well as I think it will. In the meantime, I've also been playing with a bit of the soap dough I made last weekend. This is a first attempt. 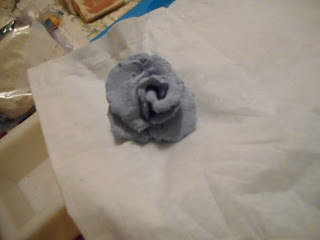 It isn't the greatest, I know, but it is an attempt at least. The dough is still on the "wet" side. I think it could do with a little bit of open air time, just to firm it up slightly. For this attempt, I used a Wilton petal cutter. It has 4 petals in a row and the idea is to cut out two strips, lay them on top of each other, slightly offset and then roll them up. The soap dough didn't stick to each other and one strip slid a bit. For a first attempt, though, I'm not disappointed. I'll probably use it on top of a bar, possibly even make a batch called "I Never Promised You a Rose Garden", studded with a bunch of roses on the top, and then scent it with something completely different, completely unrelated to roses.