It seems I've decided, without actually making a conscious decision, that I'm going to start this year by making a years supply of soap. I must say, it feels good to be back in the groove.

February's upcoming challenge on the Soapmaking Forum will have something to do with molded soap, playing with soap as you might with PlayDoh. The "dough" is allowed to saponify but not to cure, or harden. It can be molded to any shape and then allowed to cure. The challenge was announced early so that there would be time for us to make our soap dough. I made mine yesterday and bagged it today. 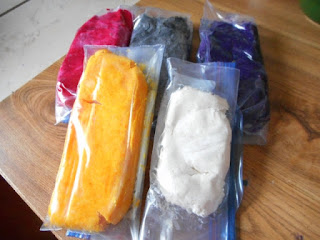 I saw a suggestion for making the three primary colours, yellow, red, and blue, plus black and white. My primary colours came out very intense while my black came out looking more like wet concrete. My white is white but there isn't much of it and I think I might need more if I want to tone down the really intense colours so I made another full pound of white today. I'm really looking forward to the challenge and seeing what everyone else comes up with. I've been doing a lot of thinking and already have an idea or two. 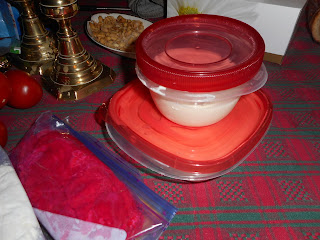 After last weekend's failure, I wanted to make another goat's milk soap so that was done this afternoon, after I ran out to Home Hardware to pick up another jug of lye. I thought I had enough but when I weighed out what I had, I was about 20 grams short. My oils were already blended together so I couldn't really reduce the batch size. Thankfully, Home Hardware was still open.

I did it right this time. The goat's milk was frozen into ice cubes and the lye was added directly to the frozen milk. It was creamy white and cool when I added it to the oils. The batter came to trace quite quickly and by the time I got it into the mold, I was able to play with the top a bit. 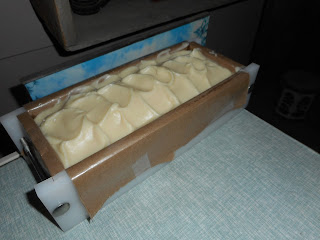 I did add lavender oil but chose not to add the lavender flower powder. I wanted this one to be a lighter colour than it would be with the flower powder. Now, the soap is resting outside, where it's 1ºC, just above freezing. That should keep it from overheating. I'll bring it in later this evening, before heading for bed.
Posted by Ev at 4:48 PM