Well, it doesn't look as if non-food vendors will be allowed at local Farmer's and Crafter's markets any time soon. If I'm not mistaken, Dr. Henry will be revisiting the guidelines in April. So, for now, my soapmaking forays have been curtailed. I am still making an occasional batch just to keep myself inspired but I've definitely cut back from my usual one to two batches per week.

Instead, I've been focusing on using my kitchen for what it was intended for -- cooking food. Yesterday, I was given a dozen free run eggs by a local farmer and we still had almost two dozen eggs in the fridge so John suggested I make something with eggs. Challenge accepted!

Quiche Lorraine is a good start, don't you think? I'd forgotten just how labour intensive making a quiche from scratch can be. Normally, I take the easy way out and buy a pastry crust; this time, the whole quiche is from scratch. I used an old-fashioned 100% lard pastry recipe because, yeah, I just happen to have a few pounds of lard around here for making soap and nothing makes a better pie crust... or soap. Well, butter's good, too, but not so much for soap.

The pastry was made first thing this morning and allowed to rest in the fridge until needed. Then, I mixed up the eggs (4 of them!) and cream mixture and stored that in the fridge as well. I grated the cheeses and prepped the rest. Instead of strictly following the traditional Quiche Lorraine recipe, I decided to add a couple of sauteed leeks and a handful of spinach leaves because veggies are good for you. Right? 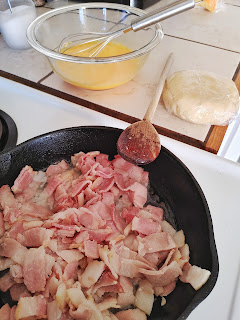 Once it was all prepped and the pastry had been mellowing out in the fridge for a couple of hours, I rolled it out and blind baked the crust. Then, everything was put together and baked. 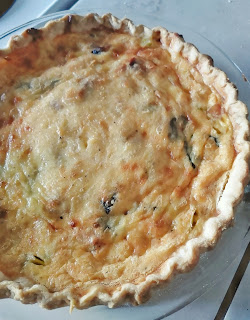 My house always smells good when I'm making soap but walking into the house after making this just makes my mouth water. I'm looking forward to dinner!!

Oh, I thought I'd share a nifty little tool I picked up a while back at our local Asian market. I think it's meant for ginger but it works a treat for nutmeg! (Quiche Lorraine has a bit of nutmeg in it.) 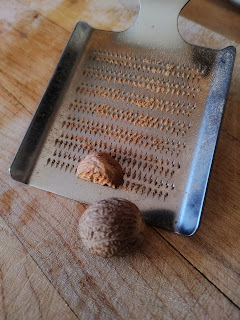